What feels like a very, very long time ago, the marvellous Val Berry, owner of Haley and Clifford asked me if I could make scones for her as well as the cakes I was already supplying.

Actually, that's not quite true. What she really said was "I bet your scones are great, aren't they Jay. I'm not happy with the scones we've got. Could you do some?" To which I obviously said, "No problem," whilst thinking to myself, "I've never made a scone in my life."

That led to 2 weeks of mad recipe testing, trying to find the nicest rise, the lightest texture without falling into the burn of too much raising agent. The egg versus no-egg recipes, the egg wash versus milk wash, then standing in the school yard with various trays of scones and coloured counters to get people to try several and choose their favourite.

I was VERY thorough. 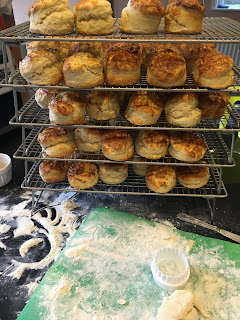 Seven years on, I've made an awful lot of scones.  I've demonstrated scone making at a church ladies' group,  taught kids and adult groups and once, to my bloke's endless amusement, insisted on talking to the chef in a guest house that served utterly revolting tough hockey pucks as their 'cream tea' and told him what not to do and gave him a decent recipe. (Poor man. He looked most uncomfortable. But for God's sake, he kneaded the mixture in a machine. He HAD to be stopped)

Just this Saturday morning I got up early to blast out 6 and a half dozen for my lovely WI Darling Roses to serve at the local Wool Festival.

All this is my pitch for Why You Should Listen To Me When It Comes To Scones.  Because you should, you really, really should.

Scones are the single easiest things to bake as long as you know how.  They are an absolute doddle. No kneading, no creaming butter and sugar, no technique beyond Doing The Minimum.

So, how to make scones:

First, what not to do - Don't work the mixture. Don't knead it, don't roll it out. Barely touch it. You don't need to and the less you do the better your scones.  Lazy bakers make the best scones. You don't even need to do that rubbing the butter into the flour thing if you don't fancy it. You can stick it in a food processor if you like.

You can sift the dry ingredients together and rub in the butter until it's like slightly damp sand
OR
You can tip it into a food processor and blitz it until completely combined.

If you've used the processor you need to tip things into a big bowl for the next bit.

Pour in 300ml of milk. If your milk is on the turn, all the better. You can swap out 50ml of milk for yogurt if you have it in, you can sour your milk by warming it slightly in the microwave and sloshing in a dash of lemon juice, or just use it as is. It's totally fine.

Here's the important bit:
Mix the milk through the dry ingredients until there are no pockets of dry flour. I use a butter knife, you can use a wooden spoon if you'd rather, but do it S-L-O-W-L-Y. No muscle power, no energy, just barely mix it. If it's not quite come together, use your hands to gently bring it together into one big sticky mess. It will look a right flipping state but don't worry.

Tip the mess onto a very well floured surface. (I have a large thin chopping mat I use, because that's easier to remove scone dough from than my counter.) Pat it gently with your hands until it's approximately even. Don't use a rolling pin, there's no need.  Either flouring your hands or dampening them will reduce how much sticks to you.   All you are after is a reasonably even thickness of dough. At a guess I'd say about 2-3cm thick for 12 scones.

Dip your cutter into some flour, cut out your scone by pressing down, NOT twisting. You can give it a little shimmy if it's sticking, but promise me you won't twist it. If you twist you are sealing the top and bottom edges together which dramatically affects the rise.

NB - that's why using a small glass as a cutter isn't as effective as a cutter - pressing the glass into  the mixture inevitably presses the top and bottom edges together because of the air pressure trapped in the glass as it's forced to accommodate the scone dough.

I want to show you the difference between a scone made the way I suggest and a scone that's been kneaded a bit. 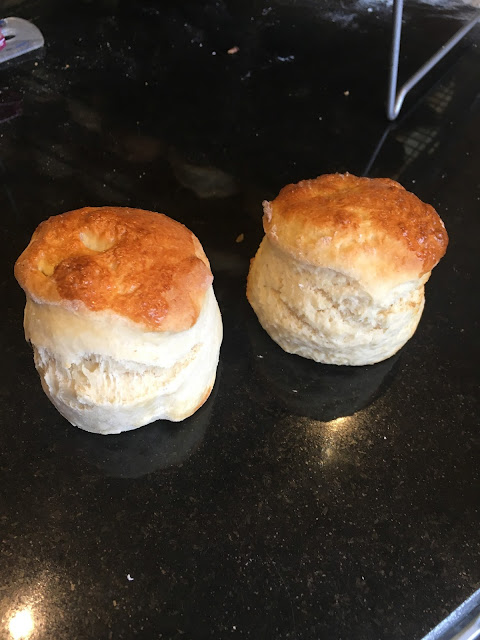 That one on the left is the result of kneading the bits left over to make some spares for the family after doing the proper scone (on the right). Can you see how the right hand side could rise evenly whereas the left one has a split across the middle as the only place it could rise. It was made with more dough than the other but turned out the same size.  It was quite nice but not as light as it could be. 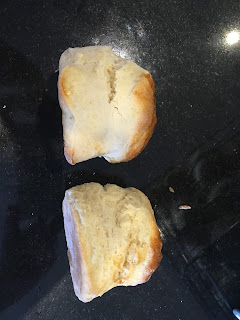 Here's a size view - the top one is smoother, and has a much tighter crumb That's because the gluten in the flour was activated by the slight kneading. The lower one is light as air. It looks less smooth but that's a Good Thing in scones.

I told you it was easy! Mix some dry ingredients, give a rough stir to mix in the milk, don't bother to roll it out, just pat it gently, cut by pressing rather than twisting. Perfect scones.

Oh, and the rhymes-with-gone versus rhymes-with-stone thing? It rhymes with gone, in case you were wondering.